Illegal hare coursing has been identified as a national problem, and is one of the top five rural-based issues complained about to Wiltshire Police by land owners and farmers. 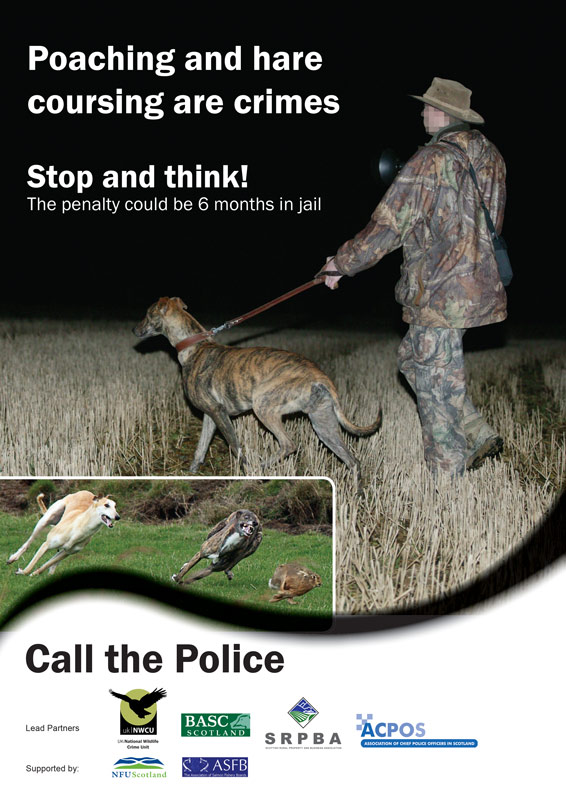 What is hare coursing?

Hare coursing is essentially poaching, but is just the method use to take game. This can be done in the daylight or under a lamp at night.

Hare coursing is seen by offenders as a sport, it involves two fast lurcher type dogs being set loose to chase a hare by sight, not scent.

It is a competitive activity where dogs are tested on their ability to run, overtake and turn the hare before finally catching it, this usually results in the death of the hare.

Hare coursing isn’t just about dogs chasing hares in fields, there are strong links to organised crime, with farmers and land owners often being threatened and intimidated by the hare coursers, along with illegal betting taking place on the results of each race.

Statistically hare coursers will travel great distances to carry out this illegal activity, they will travel to areas of the country where the land is flat and when the crops in the fields are low, this is normally in rural areas. Wiltshire is perfect for this type of activity due to Salisbury plain and large areas of arable land being open after the summer harvest.

Other issues that are associated with hare coursing involve rural thefts, damage caused to fields, crops, and hedge lines as the hare coursers gain entry to, and drive around fields, as well as dangerous driving by the hare coursers in their attempt to escape from police, most hare coursing vehicles are either not insured, or are covered by a dubious ‘motor traders’ policy.

Some members of the rural and farming communities are reluctant to report incidents of hare coursing on their land, as they fear reprisals from the hare coursers. Reports have been made that they have been threatened with violence, threats of damage and general intimidation. On occasions these threats have been actioned by coursers with assaults committed, damage caused to vehicles and property (hay bales set alight, farm machinery smashed up, catapults used to smash windows or fired at the gamekeepers)

A recent incident on the Wiltshire/Dorset border involving suspected coursers deliberately running over a flock of sheep, leaving them for the farmer to find the following day.

Hare coursers are becoming increasingly reckless, they have been known to drive in a reckless manner to evade capture, they have previously driven at, and rammed into attending police vehicles. Often going off road, as they know police will not follow due to the types of police vehicles deployed or restrictions of pursuit policies.

The vehicles used by hare coursers usually have no registered keeper and are not insured, no tax or MOT, this makes them disposable and very hard to trace back to any persons using it.

Another worrying trend with hare coursers, especially amongst the younger generation, is the carrying of additional weapons which can be used for poaching but also as weapons. This includes catapults and air rifles. This causes concern for officer safety and the general public.