Yesterday 25th November was White Ribbon Day which launched a 16 day campaign led by the White Ribbon UK charity as part of the global White Ribbon movement to end men’s violence against women. This is an annual event that Neighbourhood Watch is proud to be supporting.

#AllMenCan is the leading message this year developed for White Ribbon UK in March when the murder of Sarah Everard brought women’s experience of men’s violence to the forefront of everyone’s minds.  It also opened up conversations about men taking action and making a stand.  This campaign wants to encourage as many men as possible to think carefully and make the White Ribbon Promise, however anyone over the age of 14 can take it. If you click on this link you can enter your details and make the promise.

The Neighbourhood Watch CEO, John Hayward-Cripps, has proudly made the promise to never commit, excuse or remain silent about male violence against women. Will you? 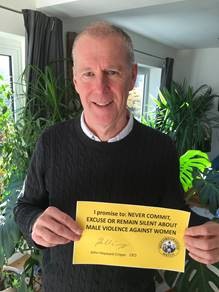